The 2013 edition of the Carus Excellence Award went to Mr. Juan Riva -President of ECSA, and Chairman of Suardiaz Group.

Carus Award for Excellence on his dedication to the maritime sector.
President of Flota Suardiaz, CEO of Suardiaz Group of companies, President of the European Shipowners’ Association (ECSA), and ANAVE Chairman (2003-2008).

The 2013 edition of the Carus Excellence Award went to Mr. Adolfo Utor -President of ANAVE, and Chairman of Balearia Group.

Carus Award for Excellence on his dedication to the maritime sector.
CEO of Spanish Merchant Marine.
Doctor of Civil Navy, graduated from the Merchant Navy in Naval Engineering from the University of La Coruna.
Master in Business Law and Maritime and Port Management from the UPC.
Professor Engines, Materials Science and Nautica, at the University of La Coruna.
Inspector Lloyd’s Register of Shipping.

Carus Award for Excellence on his dedication to the maritime sector.

Mr. Vicente Boluda, CEO and majority shareholder of Boluda Corporación Marítima, is a Doctor of Law -Complutense University of Madrid and graduated in Law Sciences, with several masters in maritime law. He has come to have the large fleet of ships in Europe controlled by a single entrepreneur, the second tugs fleet in the world and the third fleet of sea rescue of the continent with an annual turnover of around € 500 Mio euros. 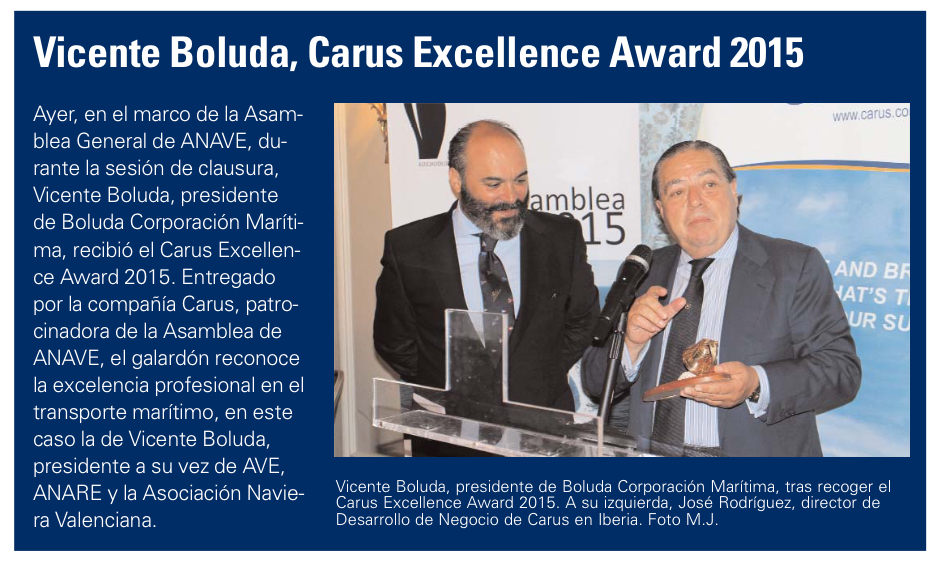 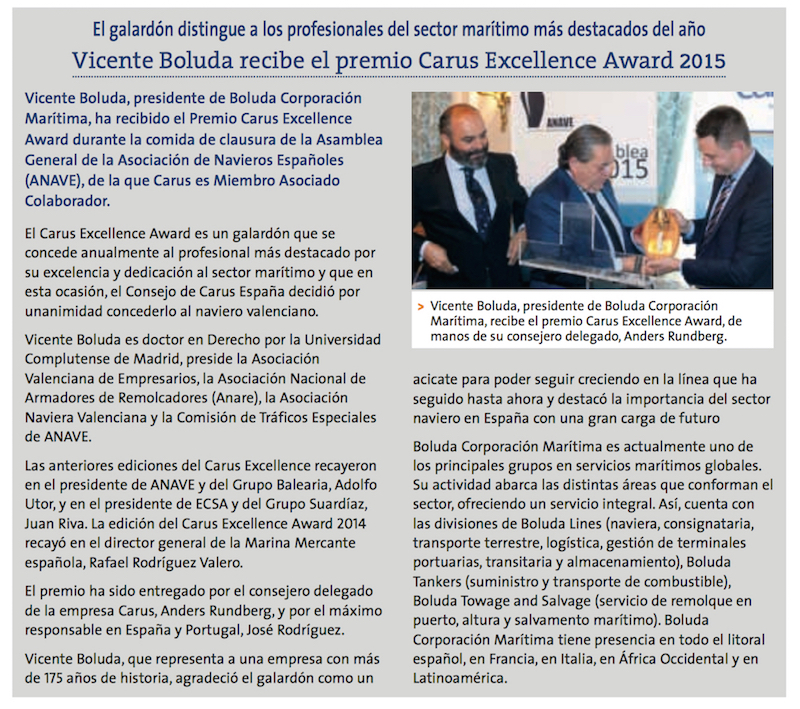 Carus Professional Business Solutions offers specialized IT solution services for ferry operators. With expertise in sales systems, e-commerce, travel and transport booking, Carus will help you to make your business processes and your IT maintenance efficient and help you to get the right information at the right time out of your systems.

Carus is present in 16 countries worldwide, providing service to 20 million passengers and over 5 million vehicles annually. Our servers handle 2 million database transactions daily, and our integration servers handle over 450,000 SOAP requests per day.

Using our position in the industry we have recruited some of the industry’s most respected senior executives to join our consulting service and we will work with you to match the right skills to your maritime concern. We have drawn together a team of ten highly experienced executives from every discipline within passenger vessel management, giving you the opportunity to source any or all roles that you may require in your management team either for a short term project or longer assignments. We can provide help for your Management Team by providing hands-on experience in areas such as: the CEO, COO, CTO, CIO, CFO, CCO, CSO and HR. 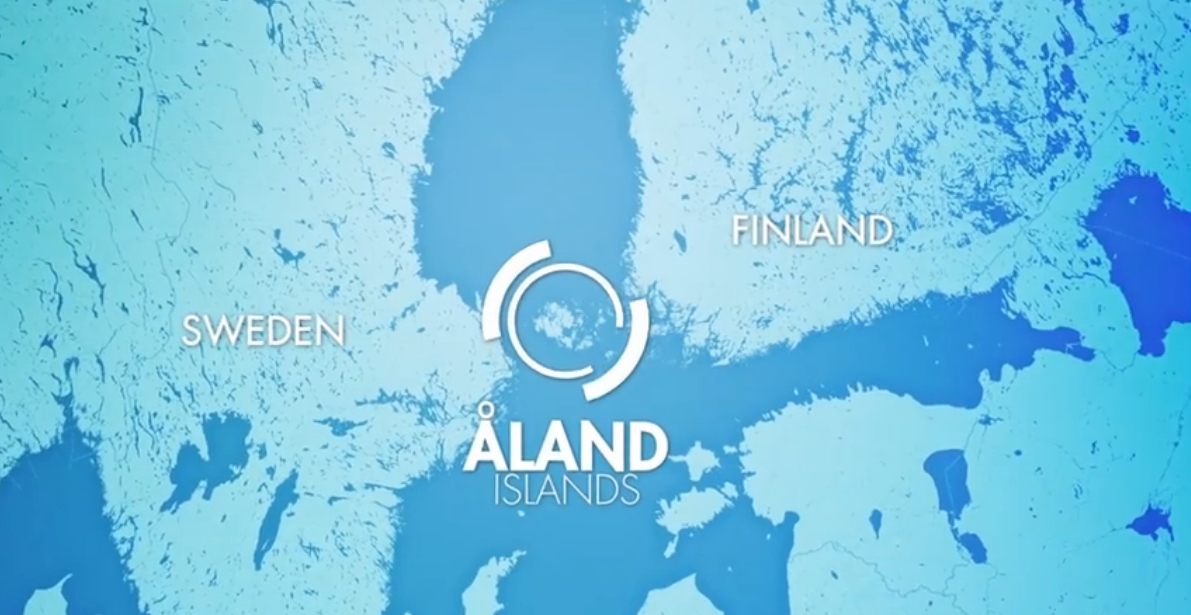 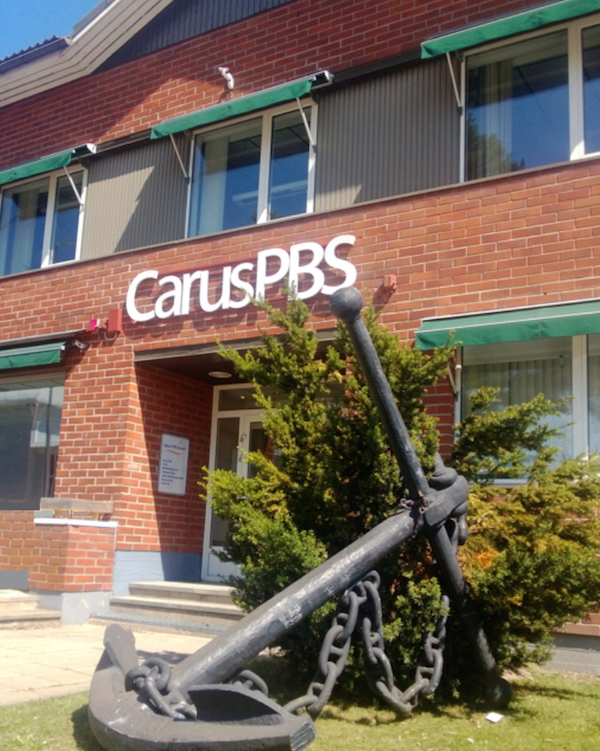 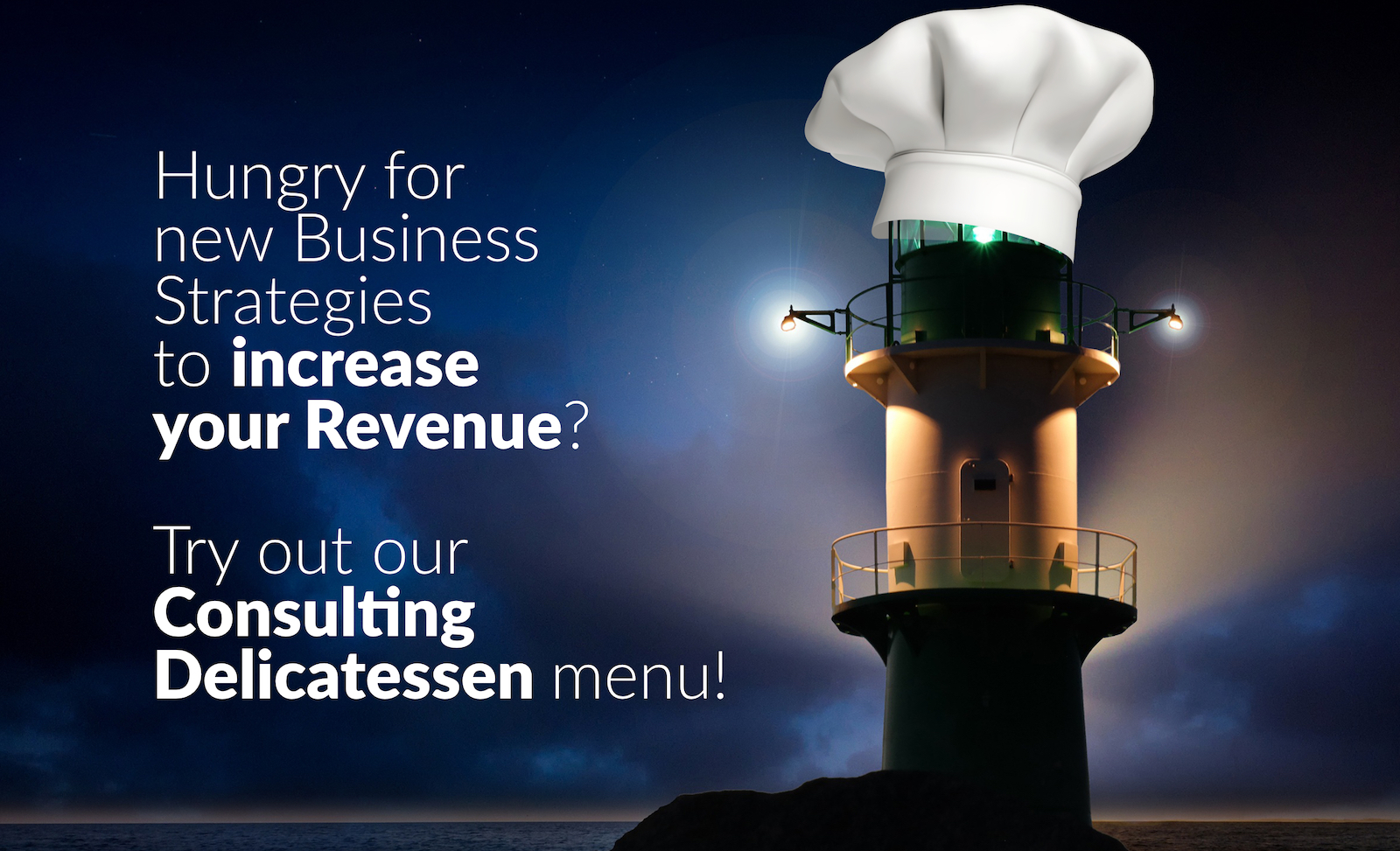